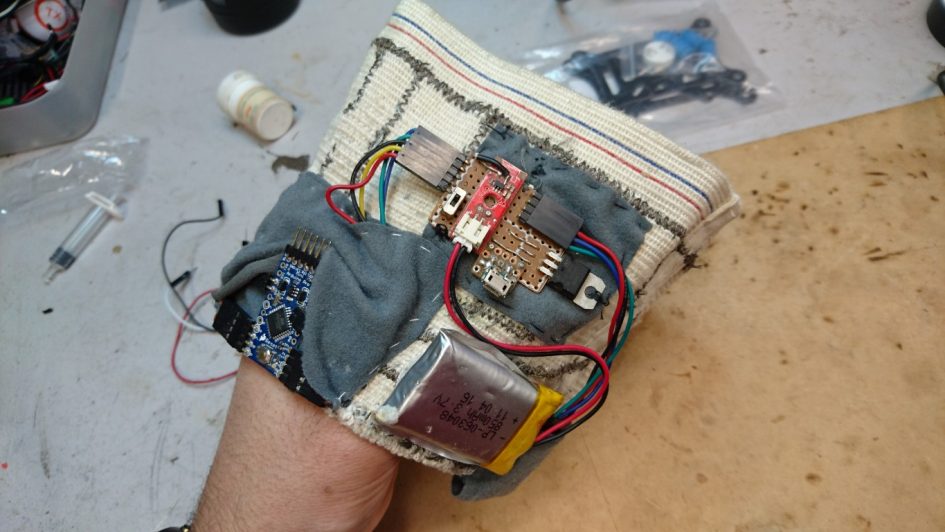 There are a lot of projects I have built across the years. Some succeed, most fail, and then there are the ones that fail but have so much potential to succeed if I “just keep pushing it but I run out of time so I leave all the parts sitting in a tub on the high shelf in my workshop in the hopes that one day I will revisit it”.

The Haptic Compass tub contained one of these projects. It was sitting on my shelf between the Automated Security System and the IoT Irrigation tubs, untouched since 2009 when I first built it.

The haptic compass band is made of a stretchy material – the compression material which people wear around their knee when they injure it – and is worn snugly around the users thigh. On the inside are 8 haptic (vibrating) motors equally spaced apart which go around the entire circumference of the band. There is a magnetometer (electronic compass) sewn on the outside (when wearing the band this compass must be centered on the middle front of the thigh so that it points forward). This compass is connected to an Arduino, which drives the motors depending on the signal received from the compass. Everything is battery-operated with a 850mAh 3.7v LiPo (Lithium Polymer) rechargeable battery. While the band is powered the operator will feel the tiny sensation of the motor closest to North vibrating, as they go about their daily business the tiny vibrating sensations move around the band to keep the one(s) facing north active. This gives the wearer the ability to know exactly which way north is at all time.

But, what’s the point? Why bother? The grandiose idea is to give us 20% more senses to interact with our environment. READ: Give us a 6th sense.

Wait! Don’t leave! Give me a chance to explain. Let’s back up a bit… We already know this is being done in the natural world. Homing pigeons are able to fly home from just about anywhere, and all this without a compass or maps… how?

Bird beaks have iron inside them which can sense magnetic fields, so the next time you tell a bird to “get lost” know that it probably won’t. My humble idea is to simply have a unobtrusive contraption which you can wear all the time (except when sleeping, that’s when you charge it) and after a few days/weeks/months(?) or using it eventually your brain will no longer be consciously aware of the tiny vibrating sensations, but subconsciously. Maybe, just maybe, at this point, it may become something akin to a 6th sense.

Cleaning out the workshop last night I came across the band, blew off the dust and had another look at it. This is that sort of project that people laugh at, some of them (yes, I am looking at you wifey) admonish me that I am wasting my time. They may be right but I’m not one to give up because something may be too tough. There is too damn much riding on this to give up so easily. Just imagine even IF I have 10% chance of being right, that’s a 10% chance of having a 6th-freaking-sense! Why would you not pursue this?

Back in 2009 when I first built the band the magnetometer wasn’t very reliable and it cost me around $150 (from memory). But since smart phones picked up in popularity the humble magnetometer has now become a powerhouse of senses. I was able to pick one up from eBay for $3 (yes! 3-freaking-dollars! Including shipping!) and it included a 3-axis accelerometer! So now I think it is time to revisit this project.

The original prototype is still in working condition (see photos below), but I can’t find the code. So I will need to rebuild it from scratch.

This LED array was used extensively for the vibrating algorithm testing, north is initially aligned to the yellow LED.

The compass module. This must be facing forward on the wearers thigh.

On the inside you can see each motor covered in soft, grey fabric.

Initially conductive thread was used for the traces, but this could only carry enough current for signals and I needed it to power the motor. So I reinforced each stitch with actual threaded wire in a zig-zag pattern to allow stretching. This actually worked really well and was durable. The achilles heel of the device is the solder joints on each motor, which would fatigue and break every so often. This was a limitation in the design of the motors which were never made for this purpose and exposed the solder out the side of the motor.

Charging the device with a micro-USB cable. Easy and quick.

Some pictures taken while building the prototype 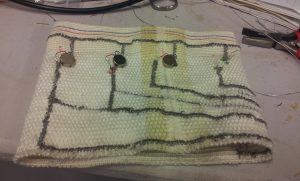 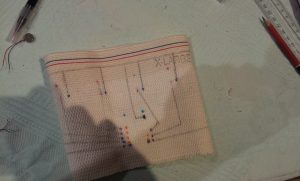 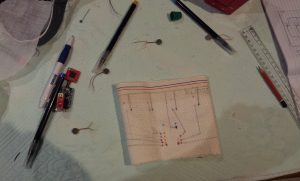 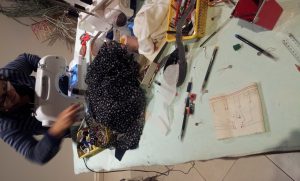 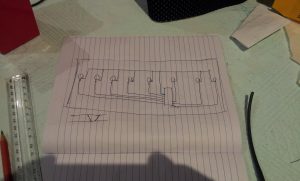 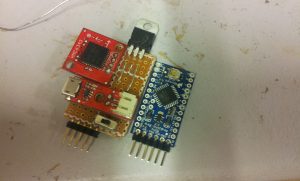 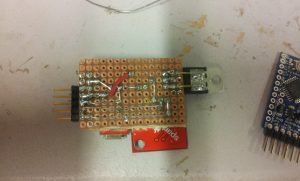 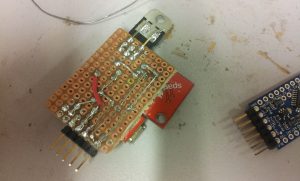 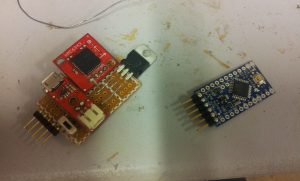 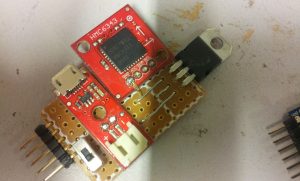 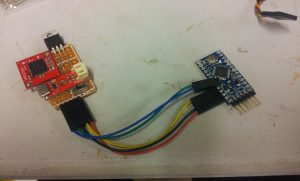