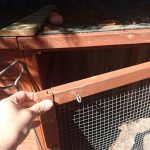 The coop door. Measuring the distance for motion. 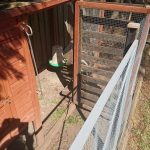 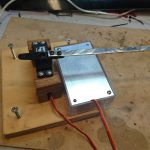 Had a bunch of spare parts lying around 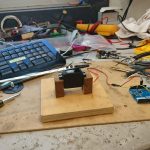 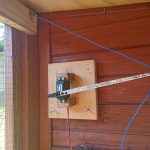 Servo is in place 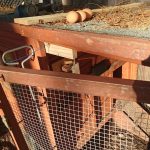 Initially I made a simple Arduino-based mechanism to open and close the door on specific times of the day.
This was just a stop-gap solution made to prevent me from pulling my hair out in the short term. It isn’t too reliable because sunrise/sunset occurs at different times of the day throughout the year.

A long term solution would be to grab all the sunrise/sunset times for a few years from the internet and hardcode it in to the Arduino. A better idea is to have a smart IoT device which grabs the information in real-time and updates its status to a centralised server. Also, being able to manually control the door remotely would be nice.

Building it this way will give me a great framework which I can reuse in multiple other smart automation tasks around the house. The flexibility comes in the fact that we can have a Linux computer for most of the software tasks including network access, and an Arduino for interfacing with sensors and the real world.
To me, this is the cheapest and most versatile Internet of Things machine we can build.

Luckily for me, I have built several embedded and IoT machines for various companies in the past and much of the code can be reused. Unfortunately, I have signed contracts which won’t allow me to share this code, but the important parts I will likely re-write so that it can be uploaded to my GitHub.

This project is continued in part 2